Banks around the world have increased lending by 10% since the start of the Covid-19 pandemic to help businesses survive, reveals a new study by UHY, the international accounting and consultancy network*.

Outstanding lending to businesses across the ten biggest global economies hit a total of USD32.7trillion last year, an increase of USD3.1trillion (10.5%), compared to USD29.6trillion of outstanding loans a year earlier.

Chinese businesses have experienced the largest increase in value of bank lending out of the world’s leading economies. In China alone, outstanding loans to businesses increased by USD1.8trillion (11%), reaching a total of USD16.04trillion last year, up from USD 14.27trillion the year before.  The People’s Bank of China established its small business loans programme in February, offering low-cost funds to commercial banks to lend to businesses.

UHY’s study found that as well as China, other BRIC countries also experienced a particularly large increase in bank lending in the last year – a 12% increase on average. Brazilian banks increased their business lending by 18% (USD46.3billion), topping the table in UHY’s study with the largest percentage increase in lending.

BRIC countries outpaced the G7 (9% growth in lending on average), as countries such as Canada saw a decrease in total lending to businesses through the pandemic (-0.3%). G7 countries added an extra USD1.2trillion to outstanding loans, reaching a total of USD15trillion last year.

The eight major EU economies in UHY’s study are lagging behind other world economies in increasing lending, adding only 5% to outstanding bank lending last year. Outstanding lending stood at USD4.9trillion last year, up from USD4.7trillion in the previous twelve months. Countries including Poland (-3%) and Ireland (-7%) have seen a decrease in the value of outstanding bank credit to businesses compared to pre-Covid.

Growth in bank lending has been largely driven by Government-backed Covid loan schemes.

The UK’s Covid loan schemes, including Coronavirus Business Interruption and Bounceback loan schemes have already provided USD95billion to struggling businesses. The Economic Injury Disaster Loans and Paycheck Protection programmes in the US have approved over USD719billion in lending to small and large businesses.

In contrast, the Irish government only launched its COVID-19 Credit Guarantee Scheme in September 2020. As a result, unlike the majority of other countries in this study, Ireland saw its total outstanding lending to businesses fall over the Coronavirus period.

UHY member firm UHY Farrelly Dawe White Limited in Ireland adds that some SMEs in Ireland are relatively averse to taking on debt and therefore the levels of lending, even with this new government scheme, are unlikely to grow as quickly as in some other countries.

UHY says some countries in this study may not have gone far enough to provide Government backed support to businesses.  Pakistan, the Philippines, Russia and Vietnam have stimulated lending but have not gone as far as some other countries in implementing a Government-backed, guaranteed coronavirus loans package for businesses to access.

This lack of a Government guarantee on lending is likely to have constrained commercial banks’ approach to emergency Covid-driven lending. These banks were forced to underwrite loans far more conservatively and slowly as they were taking the full risk of defaults, unlike banks in countries like the UK and US for example.

Whilst these countries have developed other measures, including payment deferrals and tax holidays, a lack of Government guaranteed cash support for businesses affected by Covid-19 could result in higher levels of insolvencies and job losses.

Dennis Petri, Chair of UHY International, says: “Governments worldwide have clearly learnt lessons from the credit crunch and global financial crisis of 2008 and moved phenomenally quickly to roll out large-scale lending packages. These have served as a lifeline for many businesses.”

“The past year has seen some of the biggest spending ever by Governments across the globe. That intervention has allowed commercial banks to get lending into the market at an unprecedented rate to prevent a catastrophic loss of jobs and an even greater economic crisis.”

“The economic impact of the pandemic has lasted longer than anyone expected, with even the strongest economies facing a long uphill journey. As the hopes of a quick recovery fade, Government-backed business loan schemes will need to be extended until restrictions are lifted.”

“The news of a vaccine provides a light of the end of the tunnel. But with many businesses still not able to return to ‘normal’ operating levels, Governments need to provide as much support as possible to ensure businesses stay afloat until then.”

Banks have increased lending to businesses by 10%, adding USD3.3trillion to total outstanding loans in the last twelve months 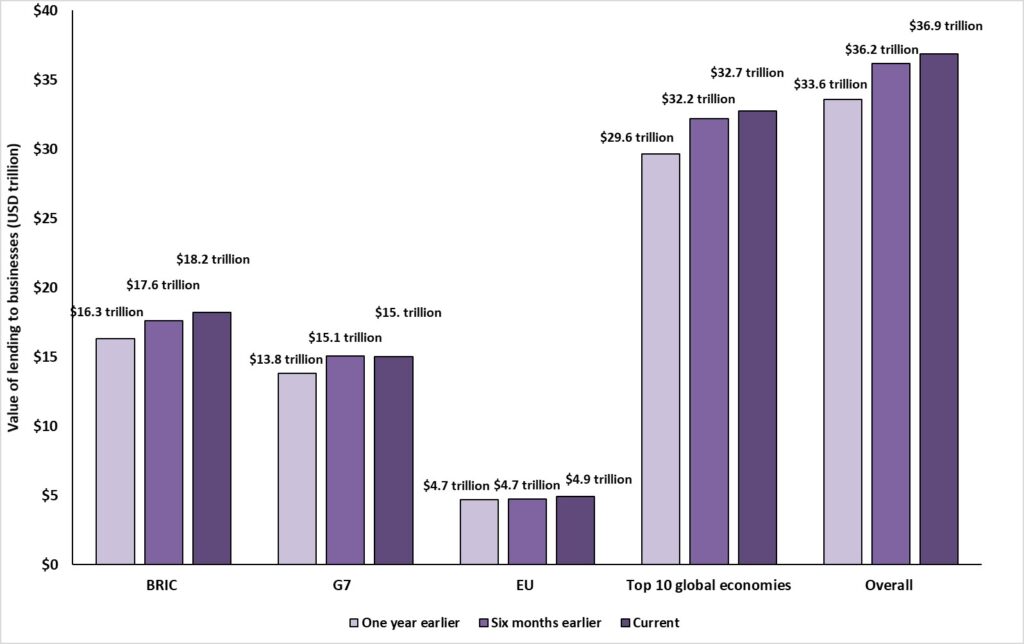 China created 1.25 million more new businesses during Covid pandemic – leading the world in new business creation
RECOVERY
The global economy is waking from its Covid slumber, but what will drive recovery? We suggest three post-pandemic drivers of growth
GOING GLOBAL – THE RIGHT WAY
INTERNATIONAL AMBITION MAKES SENSE POST-COVID, BUT MAKE SURE YOU ARE FULLY PREPARED TO MEET THE CHALLENGES AHEAD