Businesses in Europe pay an average of over $6,202 in taxes on employment for a worker earning $30k – 13% above global average

European economies rank markedly above the global average in the cost of taxes on employment for businesses, shows a new study of 23 countries by UHY, the international accounting and consulting network. Across Europe, the average cost of employing a worker earning $30,000 per year is now $6,202 (20.7% of salary), 13%% more than the global average of $5,468 per year - 18.2% of salary. This includes costs such as social security, unemployment insurance and mandatory pension contributions.

As more countries face rising economic stress triggered by inflation and increasing interest rates, governments are likely to come under more pressure to cut these costs. The lower the costs of employing workers, the less likely businesses are to need to make layoffs if their economies enter recession.

Subarna Banerjee, Chairman of UHY International, says that some significant economies levy employment taxes far below the global average, including New Zealand (4% of salary) and the Republic of Ireland (11.1% of salary – see table below).

Banerjee says that more governments could consider reducing the employment tax burden to help protect both businesses and workers as more economies threaten to slide into recession in the coming months.

Says Subarna Banerjee: “As businesses around the world face growing cost burdens, more governments could consider using the levers they have available to help them. Reducing taxes on employment would be a pretty direct way of incentivising businesses not to make redundancies.”

“Many economies have enjoyed near-record levels of employment in recent years, but that is expected to change. Keeping as many people as possible in work should be a key target for policy-makers in the coming months. A rise in unemployment will only exacerbate the issues many countries are facing due to consumer spending dropping sharply.”

Both New Zealand and the Republic of Ireland are amongst the economies with the lowest burden of employment taxes in UHY’s study of 23 countries worldwide. Ireland ranks 17th overall, while New Zealand is 22nd.

Employers in New Zealand pay just $1,209 per year in taxes on employment for a worker earning $30,000. This includes the national KiwiSaver pension fund (3% of salary) and the contribution to the Accident Compensation Corporation (1% of salary). Employees have even lower costs, paying just a mandatory 1.39% of salary on top of income tax.

Employers in Ireland pay just $3,315 per year in employment taxes for a worker earning $30,000, through the country’s Pay Related Social Insurance (PRSI). The rate of PRSI is reduced even further to 8.8% if the worker earns less than $481 per week.

Grant Brownlee, Director at UHY Haines Norton, UHY’s member firm in New Zealand, comments: “With the New Zealand economy slowing unexpectedly in the last few months, it’s important that businesses aren’t burdened by employment taxes. Our unemployment rate is among the lowest in the world and it’s important that businesses aren’t forced to make redundancies should we enter a recession. For businesses, laying off staff can be a last resort if taxes stay low.”

UHY’s study assessed the annual government-levied taxes to businesses of employing workers on salaries of $30,000 and $300,000 during the 2022 tax year across 23 countries worldwide. The full study is available below. 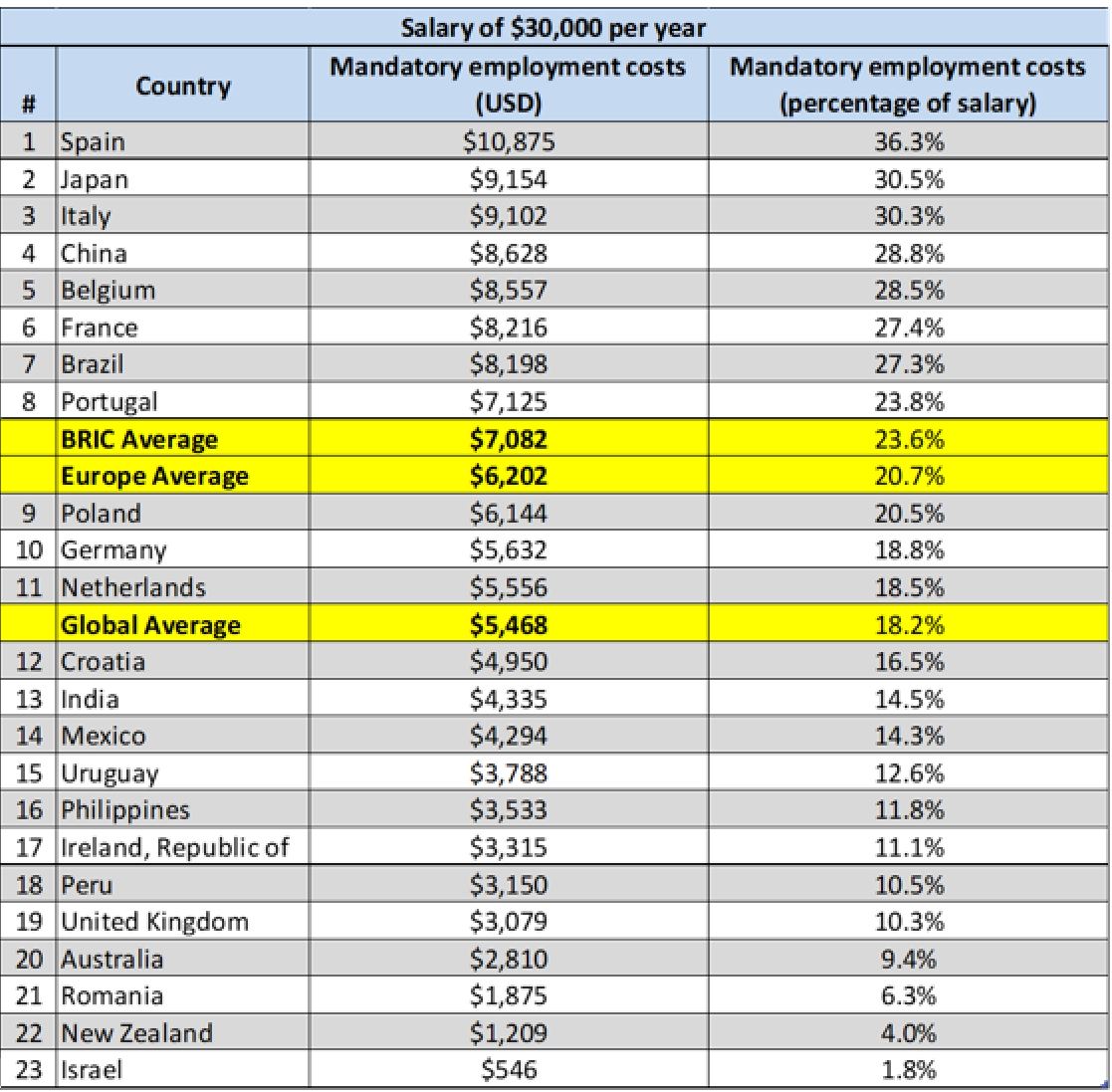 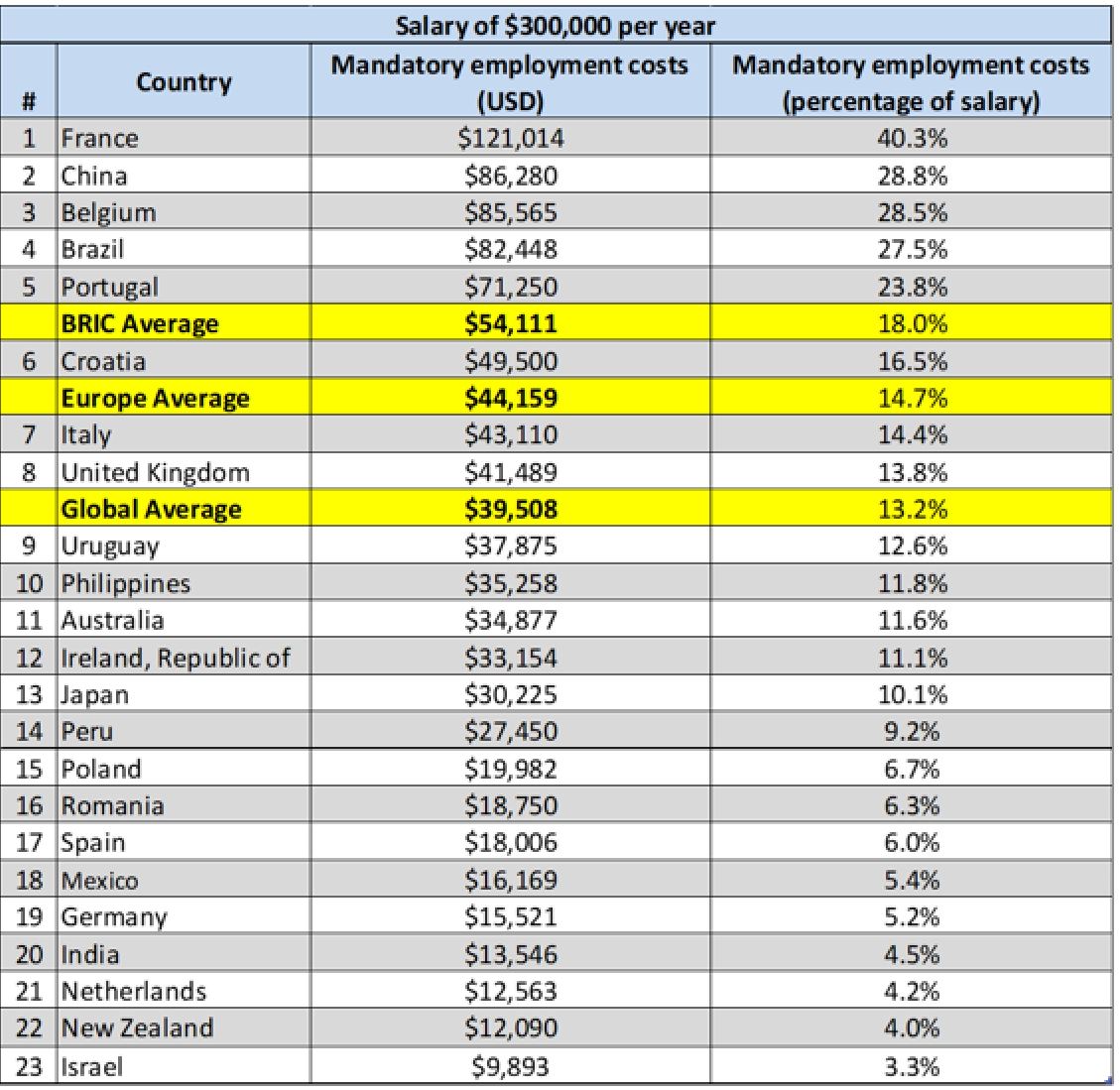 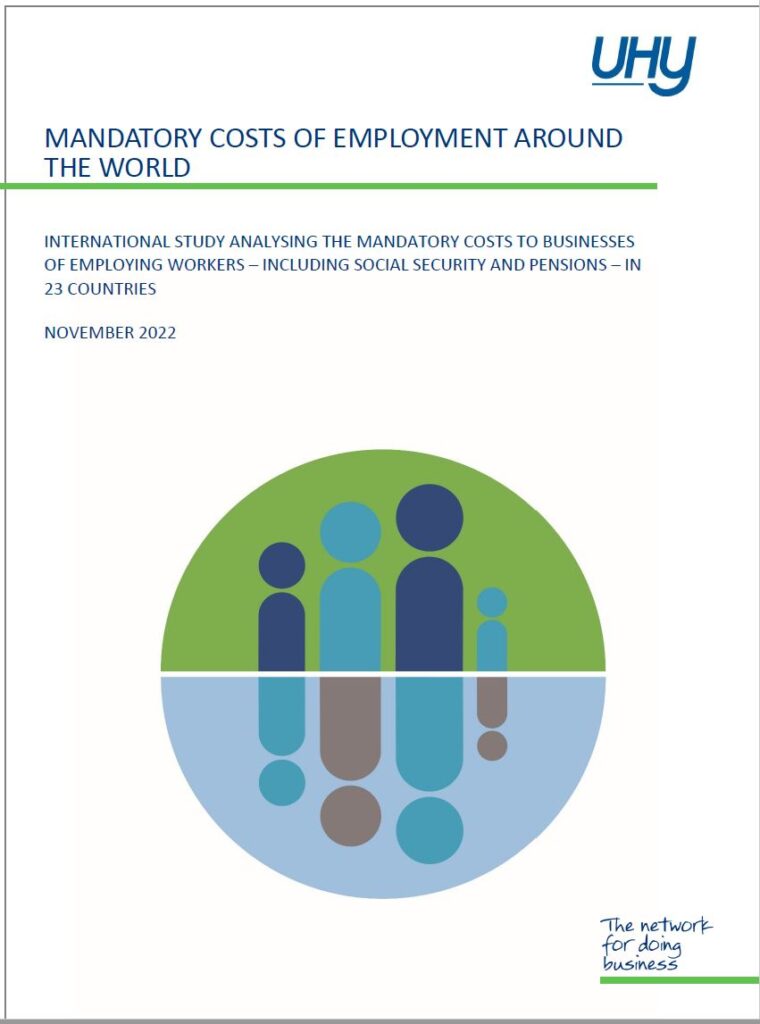 SEASON'S GREETINGS
SEASON'S GREETINGS and best wishes for a successful 2023
Businesses in Europe pay an average of over $6,202 in taxes on employment for a worker earning $30k – 13% above global average
Calls for European governments to reduce cost burden on businesses as recessions loom.
OVERCOMING BARRIERS TO INNOVATION
Often innovation provides a competitive advantage. It may enable a business to be first to market with a new product or service. However, there are barriers. Perhaps predictably, these are amplified in times of crisis. So what can we do to overcome them?